The patient, a retired accountant has been showing early signs of dementia affecting mainly his short term memory and his concentration. He previously visited this doctor with a shopping list of items- among them a urinary tract infection for which treatment was prescribed..

He now returns to the doctor after being hospitalized with acute uro-sepsis during which time there appeared a transient worsening of his mental status: confusion, hallucinations, etc.,

He is particularly anxious about the terminology “cognitive changes” used in the discharge summary in light of the fact that his older brother is suffering from Alzheimer’s disease.

The patient opens the interview with a 4 minute monologue about how he was hospitalized, and about three issues that concern him as a result of the hospitalization: the vitamins his nephew sold him as a wonder cure just prior to his hospitalization, the suggestion that he may now have early dementia, and his planned trip to France.

The doctor responds with a clear explanation of the uro-sepsis and the need for treatment and and a urology consultation re his prostate, When pressed by the patient to discuss the cognitive issue the doctor attempt to reassure the patient that the problem need not be dementia at all.

Tags applying to this video

A distant travelling salesman has a bowel disorder – I suffer from X, Y and Z… and I hate my work (clip) 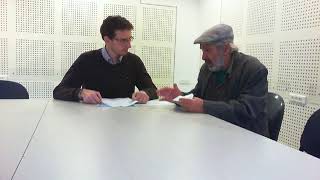